Imagism, the poetic format initiated by Ezra Pound, had a significant impact upon the sculptural work of his associate Henri Gaudier-Brzeska. Too poor to buy stone, the artist initially made use of off-cuts acquired from the mason who occupied the other half of his Putney studio. Thus, the form and to some extent the imagery of his work was conditioned by the shape, size and density of the available stone. Therefore it may not surprise you that Gaudier-Brzeska claimed that the sculptor’s task was one of winning an image from stone and allowing figures to emerge from the material.

Figure (1913) illustrates this point well. It appears quite square from the front, with its curves only revealed in the side view. The figure is confined by the footprint of the original block of stone, and yet it is still suggestive of a woman’s form. The sense of movement is compelling and, to me at least, the figure appears to move upwards and out of the restraining grip of the granite. This suggestion of movement, in conflict with the obstinate manner of stone, creates a tension between the sense of fluidity and permanence.

In Figure the constricted bound manner of the hands with the arched back and neck demonstrates how the stone has been used to its full potential. It is not a gratuitous use of material and this sense of efficiency is a key concern of Imagism, one we can identify within Pound’s ‘In a Station of the Metro’, a poem which was reduced, over a significant amount of time , to just a connotative assembly of words. In the poem the word ‘Petals’ invokes delicate beauty yet it is loosely defined. Pound uses an impressionist form of language in the same manner as a painter might daub paint on a canvas – and such a mark may easily pass for a petal or a blurred face in a crowd. But what bearing does this have on Figure? I believe that Gaudier-Brzeska’s suggestion of a form rather than a blunt approach to its rendering echoes the devices employed by Pound.

Wrestlers (1914) exhibits Gaudier-Brzeska’s talent for rendering organic form with a sense of geometric design. To these forms we can seek to apply another of Pound’s Imagist axioms:

Don’t make each line stop dead at the end, and begin every next line with a heave. Let the beginning of the next line catch the rise of the rhythm wave, unless you want a definite longish pause.¹

The relief’s horizontal composition creates a sense of elongation and rhythmic distortion within the figures. As the eye moves across the snake-like limbs there is little sense of force, or to use Pound’s word ‘heaving’, the figures knit themselves together. Only the shadows formed by Gaudier-Brzeska’s deep cutting into the plaster cause us to pause at the perimeters of the entangled bodies and so often these contours send the eye upwards as if it were surfing upon Pound’s ‘rhythm wave’. 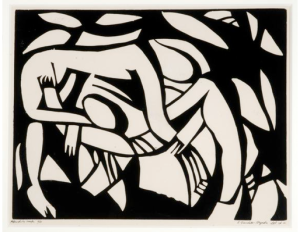 In a letter from December 1912, Gaudier-Brzeska describes attending a wrestling match as a preparation for the commission to which this work is associated:

Last night I went to see the wrestlers – God! I have seldom seen anything so lovely – two athletic types, large shoulders, taut, big necks like bulls, small in the build with firm thighs and slender ankles, feet sensitive as hands, and not tall. They fought with amazing vivacity and spirit, turning in the air, falling back on their heads, and in a flash were up again on the other side, utterly incomprehensible.²

In the plaster relief and accompanying preparatory studies [an example of which is shown above], he is clearly looking to find the most direct means of conveying the energy, rhythm, and spirit of the match. The progress made from drawings to the sculptural work shows that Gaudier-Brzeska became less dependant on figurative representation, instead accomplishing the desired dynamism through expressive distortion, complex entanglement, and symmetry. The actuality of anatomy is renounced in order to better express the image. In doing this Gaudier-Brzeska’s evocative experience is translated to plaster. The result is not a simple reproduction but an evocation; a sense of the scene he witnessed and the emotions he experienced. For these reasons, Wrestlers should be read in tandem with Pound’s definition of an image as ‘an intellectual and emotional complex in an instant of time’.³

This snippet is taken from a much larger body of research within which I extended my argument to Epstein, T. E. Hulme, direct carving and the role of masculinity in this particular Modernist coterie. Even in this abbreviated form, I hope that the relationship between Imagism and sculpture reveals the rich possibilities for enquiry into the liminal distinctions between image, object and language.

Error: Twitter did not respond. Please wait a few minutes and refresh this page.